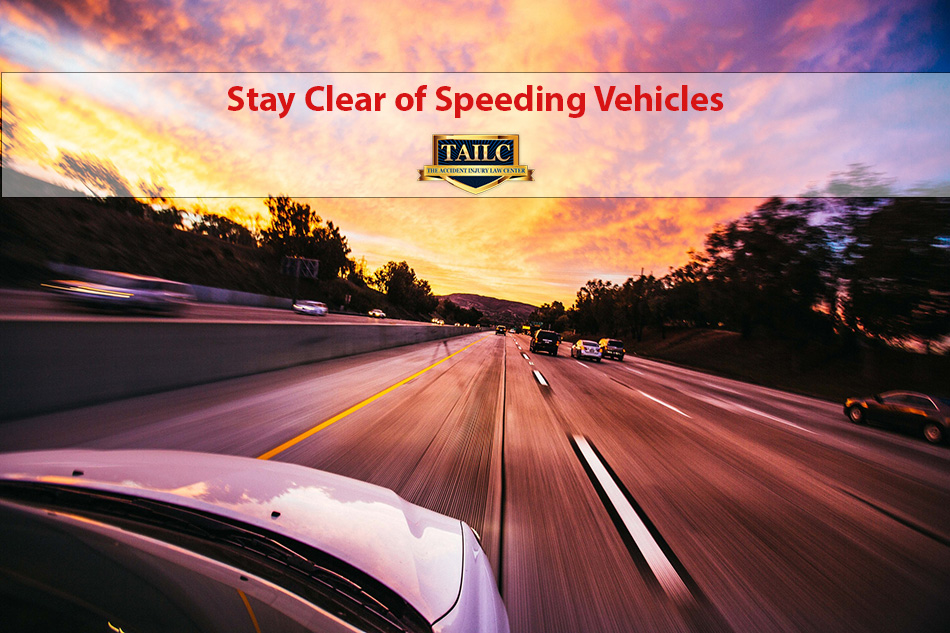 We have all seen the people who drive like they are in a race car and nearly cause an accident right in front of you. Eventually, people that like to drive fast will crash into another vehicle and someone will get injured. Driving fast is dangerous and doesn’t get anyone anywhere much quicker than if they just
drove the speed limit.
Speed limits are in place for a reason. They keep the roadways safe. If we all drive the speed limit, we are more likely to have the necessary time to react to a bad situation, such as a dog running out into the middle of the road, or someone cutting us off, or someone stopping suddenly in front of us.
Cars weigh thousands of pounds, and they need time and distance to stop, which is why there are so many skid marks in the roadways. Since motor vehicles weigh so much, they can be deadly when they hit a pedestrian. Being hit by a motor vehicle as pedestrian is worse than being punched by a
professional heavy weight fighter.
Speeding also leads to aggression. People who want to drive fast often yell, honk and curse at other vehicles that are in their way. This type of behavior can lead to road rage. If you are driving near someone that wants to speed, do your best to move out of their way and get as far away from them as possible so that you will not be near them when they cause an accident.
Sometimes you may notice a speeding vehicle on the freeway and later when you get off the freeway the vehicle that was speeding on the freeway is right next to you at a stop light. They didn’t get anywhere any faster. This is proof that speeding is not worth the risk.
Speeding is a self-centered act. Most drivers that speed develop a habit of speeding every time they get behind the wheel. It doesn’t matter if they are going to the grocery store, to pick their kids from school, or anywhere else, once the habit is developed it’s rare for someone with a heavy foot to ease up off the gas / battery pedal. Eventually, they become completely unaware of the risk they are taking every time they speed, because they develop a false confidence. The false confidence is that they are a great driver since they drive fast and have not yet been in an accident or have not been in an accident in many years.

What they fail to realize is that it only takes one mistake to cause someone severe injuries that may affect them for the rest of their life.
Some areas do not have any speed limit posted, such as in a store parking lot. Despite the lack of a speed limit sign, in these types of areas any speed in excess of what could be considered safe and reasonable under the circumstances may be considered speeding. For example, if a person is driving 15 mph in a busy shopping mall parking lot during the Christmas shopping season, this may be deemed speeding since there are likely to be many shoppers going in and out of the stores and walking in the parking lot.
The main point here is to stay away from speeding vehicles to keep yourself and your passengers safe. Sometimes we don’t even see speeding vehicles coming because they seem to appear out of nowhere. But if you notice a driver that is driving too fast do your best to stay far away from them, because they
will cause an accident eventually and you don’t want to be a victim to their reckless disregard for others’ safety.